Skip to content
HomeCould Bland Ballard’s Family be from Ireland? 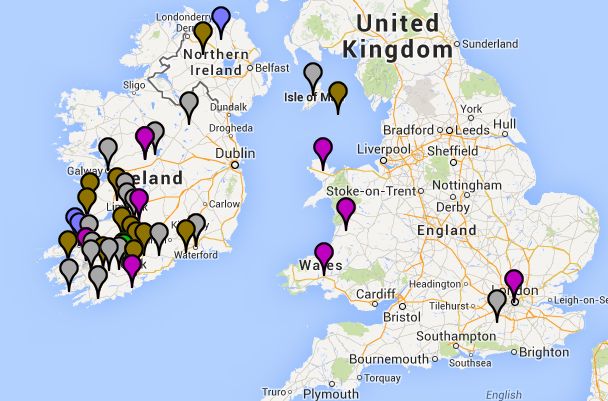 In the last week I received notice from Family Tree DNA of a number of close matches of men who tested to the 67-marker level.  None bore the Ballard surname, and all were for families in Ireland.  Some were close “in a genealogical timeframe,” which is a rather generous 24 generations.

I noticed some time ago that most of our matches (speaking for those who are exact matches in the States in Lineage Group I of the Ballard DNA Project) were in Ireland.  We made a mental note to study this in the future, and “bridging the pond” is the gold standard in this business, so in an idle moment we took some time to study this closer.  A handful in England, a couple in Scotland, but the majority are in the southwest quadrant of the island.

Family Tree DNA has a number of tools available to parse their data.  One of the more interesting is a “Matches Map” that shows the location of the earliest known ancestor of each person.  The caveat here is that this bit of data is self-reported by the participant, so there is the possibility that if their assumptions about their origins are incorrect (or the research flawed), there is no way to know and the data may be a bit off.  An increased volume of testing might help with that.

The Y-DNA – Ancestral Origins page of your myFTDNA account lists the country of origin reported to us by the people that you match. This country of origin is meant to be the country your paternal ancestors came from before recent migrations to the Americas. However, some individuals instead enter their country of birth or that of a recent ancestor. You should treat these entries as “Unknown.”

Here is what the data shows for the 111-Marker and 67-Marker results:

One match in Wales, 7 steps removed.  Six additional matches who have unfortunately not placed themselves on the map.

Exact Matches: (2).  2 exact matches in the United States, both with the surname Ballard

[note: there are additional exact Ballard matches at the 37-, 25- and 12-Marker level. For useful genealogical information, the 37-Marker test is usually recommended, and at that level, I have three exact matches with the Ballard surname; two 1-step matches, one 3-step, and one 4-step match.]

What does this mean?  For the single 3-step match, the statistical inference is, assuming a common ancestor, one would have to go back 24 generations to make that determination with any certainty.  Results are similar for the 37-Marker group.

It’s curious that regardless of the “steps”, the majority of the matches are in Ireland, which to this writer suggests that the descendants of the progenitor of Lineage Group 1, if presumably of English origin, emigrated to Ireland and then (of course) to the United States.  Assuming a generation is 20 years, give or take, we are looking at a common ancestor of all these men was someone living in the early 1500s.  Representatives of the R1 haplogroup, of course, moved into the United Kingdom from the continent in waves tens of thousands of years ago; the progression from England to Ireland makes sense.

What resources are available to the family historian studying Ireland?  Poking around some public repositories we learned that a vast number of records of genealogical interest went up in flames in 1922.  Knowing that, perhaps the results in Ireland are a bit skewed because with a paucity of records family historians are trying whatever they can to sort out their lineages (it would be interesting to see statistics on the percentage population of a given country being tested).

Still, there are bits to go on, and a search of the indexes of the Public Record Office of Northern Ireland in Belfast turned up reference to a will of a Benjamin Ballard who died in 1715.   Why is this of interest?  The Anglo-American tradition of naming patterns, for one thing — Bland Ballard of Spotyslvania County, Virginia named a son Benjamin, who in turn gave a son the same name, while Bland’s son George named one of his sons Benjamin, and Bland’s son Bland Jr. named one of his sons Benjamin.

With Belfast not exactly easy for us to get to, we found a researcher there (PRONI publishes a list) who had a look at the document — but unfortunately, it did not provide much (as of this writing, we await the researcher’s report):

I am putting this in the post today but I think you will be disappointed it is only an extract – the document will have been destroyed.   Not much information –

Speaks of his bro.-in-law, Swithin White of Rochfordstown, Co. Cork

Was there anything to learn from allied families?  Yes.

We learned a bit more about the family in two ancient law books available on Google, A Treatise on Leases for Lives, Renewable For Ever, by James Lyne, Esq. (Dublin: Hodges and Smith, College-Green (1837).   This treatise cited the case of Moore v. Dawson, which notes:

By indenture of 26th March, 1707, the defendant demised the lands of Moore Galbally, in the county of Tipperary, to William Ballard, his heirs and assigns, for the lives of Benjamin Ballard, (son of the said William), Swithin White, and Samuel Godfrey, and the survivor of them, at the yearly rent of £20, during the then wars with France and Spain …

Benjamin Ballard, one of the cestui que vies, had died in 1715, and the said Walter Harris, being indebted to the plaintiff by bond conditioned for the payment of £150, assigned the said lease to the plaintiff, to secure the said sum ; but no fine was levied thereof.

The substance of the lawsuit and its results are of no genealogical consequence.  We’re grateful that it provides what it does, even though it isn’t much.  But what can we learn about the father, William Ballard, Alderman of Cork?

A study called The Laneways of Medieval Cork, by Gina Johnson (Cork: Cork City Council, 2002) describes three Ballard’s Lanes in that city.  Names of the lanes changed over time,  but she notes:

Several Ballards occur in the records from the 17th century onwards.  It isn’t clear which individual gave his name to this lane, but it might have been William Ballard who was a prominent citizen in mid- to late 17th century Cork.  William held the office of mayor twice, first in 1687, and then in 1690 when he was the first mayor to be elected after the Williamites regained control of the city from the Jacobites.  Ballard was one of only nine individuals to have served the office twice between 1656 and 1700.  A William Ballard, probably the same individual, was one of the church wardens of Christ Church in 1675.

Another source mentions that when William first held the office of mayor, King James II also appointed Ignatius Gold to serve with him.  This suggests William was either allied with the Williamites or was one of the Scots-Irish (though his election in 1690 leans towards Williamite).  Very briefly: the Williamites supported the protestant Prince William of Orange; the Jacobites supported the Catholic King James II in the conflict over who would be king of England, Scotland and Ireland.   The result of the war is that the Protestants dominated life in Ireland, which caused discord among the majority Catholic and Scots-Irish (Presbyterian) citizens, who were excluded from power and land ownership.  Wikipedia provides a good summary of the conflict.  Evidently James II did not trust a protestant William Ballard and appointed a Catholic to serve as mayor with him.  James was the last Catholic ruler of England Scotland and Ireland, who reigned from 1685 to 1688.

The Council Book of the Corporation of the City of Cork: From 1609 to 1643 and From 1690 to 1800, by Richard Caulfield (Guildford: J. Billings & Sons, 1876) repeatedly mentions William Ballard, Alderman.  A William Ballard also served as sheriff, though the date of service is not clear from the text.  However, an ancient text called The Cork Remembrancer by Anthony Edwards (1792) lists William Ballard as sheriff in 1679 (under Charles II), and notes his service as mayor in 1687 (under James II) and 1690 (under William and Mary).  The appendix in the same volume includes an enumeration of protestants that fled from King James II (and includes an inventory of the value of their estates), and lists William Ballard, “w. and 8 ch.” (“wife and eight children”).  One other record in The Council Book provides a clue: in one instance there is the listing of a William Ballard, Jr., Alderman, in 1694, so apparently father and son served simultaneously, and perhaps Benjamin is the son of William, Jr., which leaves a large number of William, Sr’s children unaccounted for.  We have not yet found a record of direct descendants other than the snippets listed above.

We are certainly in the realm of speculation — but could this Benjamin Ballard be the father of Bland Ballard of Spotsylvania County, Virginia?  Since Benjamin died in 1715 and Bland is believed to have been born c. 1700, it is certainly possible.  Note that he was identified in the will fragment as “the only son of William Ballard …” so he likely had no brother to carry down his genetic heritage.

We’ve speculated earlier that his forename came from a marriage with a member of a Bland family.  Was such a union possible in Ireland?  Short answer – yes, for Sir Bernard Burke’s History of The Landed Gentry of Great Britain and Ireland (London: Harrison-Pall Mall, 1875) provides the lineage of Bland of Derriquin Castle:

This family claim to of Yorkshire origin.  The first who settlend in Ireland was the Ven. James Bland, archdeacon of Limerick [James was the son of John Bland of Sedburgh, Yorkshire, in what is now Cumbria; the registers of the parish church in Sedburgh contain numerous entries for assorted Blands; this can be studied online].  He m. Lucy, dau. of Sir Francis Brewster, lord-mayor of Dublin 1674-75, and was father of

Nathaniel Bland, LL.D., judge of the Prerogative Court of Dublin, and vicar-general of the diocese of Ardfert and Aghadae.  He m. 1st, Diana, only dau. of Nicholas Nemoys, and had by her a son,

Francis, father, by Catherine Mahony his wife, of Colonel James-Francis Bland, of Killarney, and of Frances, m. to the Rev. Robert Hewson

Nathaniel, m. Mary Mead, but had no issue.

George, m. Hannah Westrop, but had no issue.

Dorothea, m. to Francis Crumpe, Esq., and had, with other issue, Nathaniel Crumpe of Randalls Park, in Surrey, who took the additional surname of Bland.

Another line, though not present as early as this one, resided in Queens’s County, Ireland.  Could a female Bland relation have accompanied James this to Ireland?  There is no way to know.  The Blands are a fertile and well-traveled lot and it appears no one has completely puzzled out the descent.  A fascinating resource available on Google Books is Collections for a History of the Ancient Family of Bland (London, 1826) by Nicholas Carlisle.  These are the same lines that produced the Bland families that invested in the Virginia Company and settled in Virginia in the 17th century, but that connection, though intriguing, is too remote to take seriously at the moment.

If anyone knows anything about this Benjamin Ballard of county Cork who died in 1715, I’d love to hear about it.

Shortly after finishing this post, I was contacted by a fellow researcher who noted our connection and invited me to participate in the R1b-CTS4466 Plus Project.  This project is working to define the parameters of the CTS4466 subclade, and is seeking to identify branches within it.  This particular subclade is called the “Irish Type II Subclade,” and features prominently in the south of Ireland.  Results of this test are expected in a few months.

6 thoughts on “Could Bland Ballard’s Family be from Ireland?”